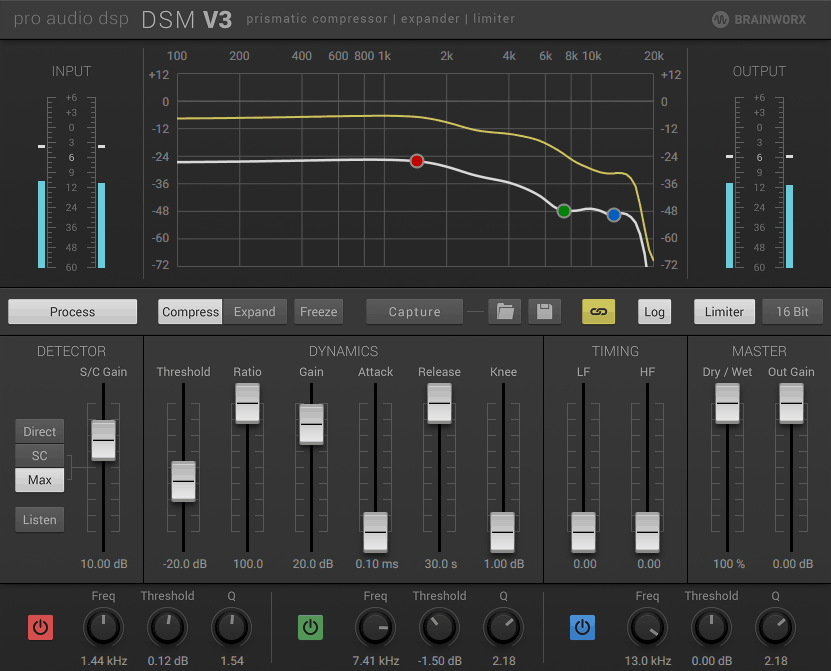 DSM as a Mastering Compressor

Multiband compressors are nothing new, but the DSM uses a continuous Threshold Spectrum and it comes directly from the track you're mastering (we call this "Capture"). This means the music gets compressed evenly at all frequencies. It's so smooth and invisible to the ear that it doesn't sound like it's doing anything!

We Don't Do Trial-and-Error

This revolutionary idea of capturing the Threshold Spectrum directly from the track eliminates the conventional process of tweaking frequency bands and thresholds by hand, in a time-consuming, error-prone, and enormously enjoyable activity. We're sorry to ruin the fun.

Having said that, of course we provide a way to make local adjustments to the Threshold Spectrum using the drag handles or the knobs on the bottom row. These model analogue EQ curves, so they feel familiar, and we've taken care to use progressive gearing so they move slowly at first.

These next two examples of the DSM's compression capabilities both leverage what's possible with the large number of frequency bands. Normal multibands don't get a look-in with this sort of thing.

Once again, the principle is the same. The DSM is aiming for the "loud-sounding" Threshold Spectrum and seeking to match the track to it.

If the Threshold Spectrum is captured from a vocal track at a moment without any sibilance, then the whole track will be de-essed. Better results and faster to use than many dedicated de-essers. The DSM is especially good on vocals, due to the high resolution in the mid-to-high frequency range.

But why stop at de-essing? All kinds of dynamic frequency vocal treatment are possible. You could capture a Threshold Spectrum from a different vocalist, even a different gender, and try that out on your track.

Character Control for Mixes and Instruments

We've already hinted at this, above, when we mentioned vocal treatments. If the Threshold Spectrum is captured from a different track, then the spectrum of that track is dynamically impressed upon the track you're processing. Trying out different Threshold Spectrums captured from successful productions will often provide fruitful avenues to explore.

These final two applications of the DSM as a super multiband compressor are from the world of production for TV, radio, online content production etc.

For continuity matching between different scenes, takes and locations, if you load a Threshold Spectrum which has been captured from a recording with desirable ambience, anything played through the DSM will be pushed towards this spectrum, ironing-out any differences.

By the same reasoning, if the Threshold Spectrum is captured from part of a recording with good vocal tone, then any deviations from this, such as due to microphone wander or the proximity effect (LF boost), will be reduced by the compression.

Having hopefully piqued your interest with the myriad of compression applications that the DSM has to offer, we'll say a few words now about "what lies beneath". After this, we'll talk about the Expander and Limiter. At the end you'll find the link to Plugin Alliance for the trial.

We've already mentioned this word "capture" a lot. The DSM has a big button labelled Capture in the middle because it's the most important thing in the entire application. When you press the Capture button, a snapshot of the spectrum is taken, and this is the Threshold Spectrum. Alternatively, press-and-hold to develop an average Threshold Spectrum over time.

It's All in the Timing

This is a subtle technical point, but the displayed audio spectrum is dynamically processed using the Attack & Release settings, so when a Threshold Spectrum is captured, it's perfectly suited to the current timing settings. We generally recommend doing a new capture whenever the timing controls are changed, for this reason. However, you can imagine the sort of fun to be had from capturing the Threshold Spectrum with one set of timing settings, but processing the track with different ones.

The DSM uses a DFT (Discrete Fourier Transform) architecture to split the incoming audio, much like a glass prism splits sunlight into the colours of the rainbow. This produces a fixed grid of frequency bands, quite unlike conventional multiband compressors. In addition, it boasts more than three times the number of frequency bands you normally get with a multiband.

Let's mention the artifacts. Any compressor will produce artifacts, especially when pushed hard. But the DSM can be pushed VERY hard before it starts to break down, and even then, the artifacts arising from the DFT frequency-splitting process are very soft and forgiving.

Another advantage of the DFT is that the DSM exhibits zero phase distortion across all frequencies.

Many people (but not you) only care about how many frequency bands there are, and their rule is, more is better. But we disagree. We care about transients too, and, due to physics and computational constraints, frequency bands and transients are like the opposite ends of a see-saw. You have to strike a balance.

The DSM design intentionally prioritises transients instead of having an even greater number of frequency bands. One of the ways we do this is through oversampling. The upshot is that the DSM keeps the live, vital feeling in your tracks. Our customers notice the difference.

This is another technical side-note: If we had designed the DSM with loads more bands, then we'd run the risk that the fundamental notes of instruments would get chopped-up into different bands and compressed with different gains, which would sound very disturbing indeed.

The DSM Limiter is audibly transparent below -1 dB (Full Scale). And it retains transient detail contained in the signal even above digital maximum, which is a pretty neat trick.

It's just one button and it's brilliant.

In DSM V3, the Limiter can be used on its own, without the spectral dynamics processing.

The Limiter also now comes last in the signal chain, after Dry/Wet and Output Gain.

THE DSM HAS EXPANDED

Despite not being engineered specifically for broadband noise reduction, we've had very pleasing - and useable - results. Traditional noise reduction processors exhibit transient smearing when pushed too hard, but that is something that the DSM certainly never suffers from.

Support is provided by
Plugin Alliance.

Paul Frindle has 50 years' experience in the pro audio and music industries. He has worked as a studio engineer in Oxford and Paris, and was a design engineer at SSL with responsibilities for E and G-series analogue consoles, emerging assignable consoles and nascent digital audio products. As one of the original team that became Sony Oxford, he is responsible for many revolutionary aspects of the Sony OXF-R3 mixing console. More recently he was responsible for product design and quality assurance at Oxford Plugins. On leaving Sony Oxford, he co-founded PRO AUDIO DSP in order to make novel sound-processing applications to fulfill many issues he had identified in the audio production chain over his career.

Paul Ryder is a software developer and musician, with 20 years' experience in the pro audio industry. During this time Paul was a key member of the development team for the Sony OXF-R3 console. He was also the principal software engineer responsible for the development and implementation of the Sony Oxford plugins.

Ant Scott is a mathematician who has contributed to high-end audio processing projects since 1998. He also worked at Sony Oxford.